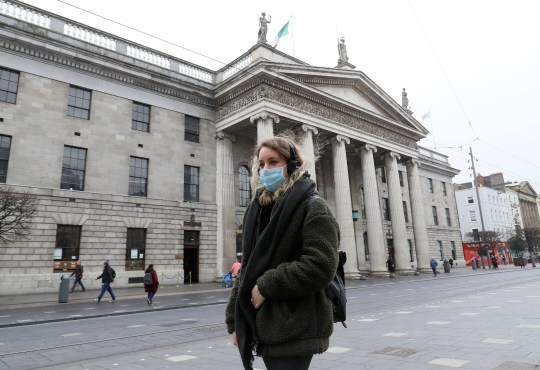 The sick and dying economic system that systematically degraded the global environment has taken a life threatening seizure. They are trying to manage that collapse in their own interests no matter what the cost to the old, the poor and the oppressed of the world. The capitalists, fearing for the security of their inhumane system, cynically attempt to turn this disaster to their own advantage so they can ensure that any money spent today can be extracted from the workers when the virus subsides. (read more)

Over the course of December and early January Ireland has seen a surge in Covid infections.  As the highly mutated and highly transmissible Omicron variant has become dominant the figure for infections has reached a level that dwarfs those seen in early periods of the pandemic.  The record number for daily cases is set and then soon surpassed while the peak of this wave still to be reached.  Yet in the face of this surge both the Irish government and the Stormont Executive limit themselves to the most minimal interventions.  (read more)

At the end of August, the Irish government announced its plans for the lifting of almost all Covid restrictions by 22 October.  The speed and scale of these relaxations are dramatic. The only conditionality is that the level of vaccination of adults must reach 90% and that Covid cases remain manageable.   (read more)

The promise and reality of vaccination

The roll out of vaccination programmes across the world has raised hopes that the end of the Covid pandemic may be in sight. There are a number of vaccines currently in use – and more awaiting approval – that have proven to be effective and safe. (read more)

At the beginning of February INTO and FÓRSA agreed a phased return to school for Special Needs pupils in special schools, followed by a return of those in mainstream settings, to be followed by the re-opening of primary schools and secondary schools, this time beginning with Leaving Cert classes. (read more)

The Dublin government announced in January that plans to reopen special schools as part of a phased reopening of the school system had been postponed. They were postponed due to a revolt by teachers and classroom assistants who believed that no real consideration of their own health and safety was involved in the decision. (read more)

While many scientific myths have emerged during the course of the global pandemic the most prominent and persistence of these has undoubtedly been that of “herd immunity”. Its basic proposition is that by allowing the virus to spread among sections of the population that are considered least susceptible to severe illness a level of immunity can be built up that breaks transmission and protects the population as a whole. (read more)

For a long time Stormont has stood as a byword for sectarianism, corruption and incompetence. Under the pressure of the coronavirus crisis these features of the political institutions have been elevated to new levels. However the goings on within the Stormont Executive last week, over whether to extend or relax Covid regulations, have manged to top all of that. (read more)

In the first phase of the coronavirus pandemic Ireland (both north and south) was viewed as having got off relatively lightly in terms of infection rates and number of deaths. The health services within both jurisdictions also continued to work within capacity (albeit at the cost of reducing non Covid services). (read more)

While there may be a perception (one that has certainly been encouraged by political and business leaders) that the worst of the pandemic is over the most recent evidence points to a crisis that - in terms of both health and the economy - is actually deepening rather than easing. (read more)

Germany leads the way out of Lockdown with a Coronavirus Riot

You could say that Germany was better prepared to deal with the coronavirus emergency because of its industry and science. Being better prepared is one thing staying the course over a length of time is another thing altogether. (read more)

Right wing governments' and the pandemic

It seems that the more right wing the government the worse they handle the pandemic.The United States and Britain's slow response and lack of action especially at the beginning of the wave of infections are indicative of ideological conflicts between their individualist philosophy and that of the collective. (read more)

Two of the nagging questions surrounding the development of the coronavirus have been answered this week in so far as such queries can be cleared up. The queries cover the extent of the spread of the viral infection through the general population and the extent to which a previously infected person has acquired immunity. (read more)

The Department of Health's statements have become a regular feature of the British Government response to the coronavirus pandemic, the making of assertions and the dispensing of advice while paying no regard to what others, meaning non-British scientists and experts, have been saying and doing. (read more)

Unionism’s silent shift on the pandemic

In the general fog a significant but silent shift has taken place in Ulster Unionism. Arlene Foster, the Democratic Unionist Party’s leader, alongside Sinn Fein’s Michelle O'Neill, announced a five-point plan for a gradual emergence from the restrictions imposed by Covid-19. (read more)

The hypocritical mantra that 'we are all in this together' is slowly being replaced by the equally false concern for the working class and the small businesses not considered 'essential' who need 'help' to return to work. (read more)

It has been reported by the Sunday Times newspaper that Sir David King a former Chief Scientific Advisor to the British Government is to set up an alternative scientific advisory group to the current one. The alternative advisory group are to go online with their recommendations and conduct open access conversations with the best scientists willing to participate in democratic debate (read more)

The publication of an essential workers list by the Stormont Executive has displayed once again its inability to offer any protection to the working class in the face of the coronavirus pandemic. Such a list had been promised after protests by workers over unsafe conditions at a number of food processing plants. (read more)

Capitalism is in crisis but the intensity of that crisis is not evenly spread across all sectors. Some will do well out of it in the medical and pharmaceutical industries and as the race for a vaccine heats up the bourgeois press boasts of the power of capitalism to defeat the disease. (read more)

The declarations of a new found approach and unity of purpose that accompanied the restoration of the Stormomt Executive in January have quickly given way to the well worn rhetoric and operating methods that accounted for the demise of its predecessor. (read more)

Many of the major issues of Irish society, claimed by the government to be insoluble because of the lack of a money tree, disappeared overnight. An army of homeless were ushered into empty hotels. For the first time in its history the Irish state conjured up a national health service by renting the large private sector. (read more)

Coronavirus Testing: Some Facts about Germany

Many European Governments have been slow to begin testing for the prevalence of the coronavirus. It is common sense to see that no rational social policy can be enacted without a good awareness of the extent of the spread of the virus within the population. (read more)

Europe and the pandemic

At first sight the Covid-19 pandemic and the conjoined economic crisis seem to support the picture from classical economics of an external shock upsetting an otherwise stable system. The evidence does not support that theory. The global economy did not recover from the 2008 credit crunch. (read more)

The Trivial Matter of Naming Things!

When a mysterious disease was reported in Wuhan in late December 2019, the cause of the disease was found to be a novel corona virus, on 11th February the World Health Organization announced that the official name of the disease would be Covid -19. This is not the formal medical name. (read more)

The callous self interest of companies determined to carry on without taking even the most basic of precautions against the Coronavirus has produced a response by workers worried about infection. The demands that are being raised by these workers are in line with the recommendations made by health professionals worldwide on cleaning and hygiene. (read more)

There is still no capacity available in any country in the world to carry out a thorough and accurate mass testing. One thing that might be useful is to use the new anti-body test to survey the population. (read more)

As all manner of right-wing Governments take on emergency powers to control the virus pandemic, powers that they may never relinquish, the alternative to police State lockdowns is being ignored. (read more)

The Corona Virus, Not just A Moral Panic

When social and political commentators first began to take notice of the Covid 19 viral infection the typical response was that it was no more than another 'moral panic' brought on by social media and the fake news and rumour that is part and parcel of the internet. The typical 'sophisticate' scorned the medical scare mongers. (read more)